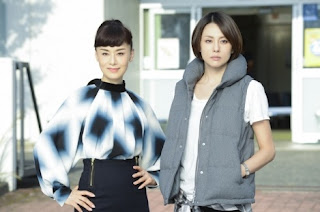 Daichi Mao will be appearing in TV Asahi's Autumn 2017 drama "Doctor X 5 ~ Gekai Daimon Michiko ~" starring Yonekura Ryoko which will begin its run from October in the Thursdays 9pm timeslot. This will be her first collaboration with Yonekura although they both coincidentally learn from the same voice trainer.

Daichi plays the role of Shimura Madoka, who becomes the first female director of "Totei University Hospital" without pulling strings and aspires to transform the hospital from one which places the medical department first to placing patients above anything else. She has high regard for Daimon's skills and hires the latter against objections from everyone around her. Although it appears initially that the two of them will get along well with their similar ideals of placing the patients on top priority, Shimura's ideal of the best way of doing things does not necessarily mean the same idea which Daimon has in mind so the two of them soon become loggerheads.

Daichi described Shimura as somewhat similar to Daimon but Shimura takes a high-handed approach towards the latter who is a freelancer. In response, Yonekura said that Daichi is a perfect fit for the role of Shimura and her screen presence built up on her past experience of being a former Takarazura top star shines through very easily. As such, Yonekura is eagerly looking forward to working with her and praised her co-star for looking very beautiful just like Audrey Hepburn.