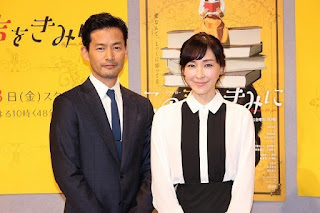 The press conference of new NHK drama "Kono koe wo kimi ni" was held at the TV station's HQ in Shibuya, Tokyo, on 31 August which was attended by the cast members Takenouchi Yutaka and Asou Kumiko. The drama which consists of 8 episodes, begins its run from 8 September in the Fridays 10pm timeslot.

The story features Takenouchi as the lead character Honami Takashi who is a 46-year-old professor teaching mathematics at an university but lacks speaking skills thus is not very popular with his students. His wife Nao (Mimura) is fed up with him and leaves home with their two children. At this juncture, he is told by the faculty dean to attend a speaking class where he gets into an argument with the lecturer Ezaki Kyoko (Asou) as he thinks that she is haughty and not capable of teaching him anything while she thinks of him as a boring guy. Although Kyoko's superior Sakura (Shibata) intervenes to stop the argument, Takashi still leaves the class. A few days later, Takashi happens to bump into Kyoko unexpectedly at a recitation session.

Takenouchi commented that it has been a month since they started filming and he is honoured to be able to act in such a down-to-earth drama where everyone puts in their best. Although Takenouchi usually played cool and handsome characters in the past, he said that his character this time is an irritating and somewhat pitiful person who you can't help but want to support and encourage. Takashi knows that he has to change and is serious about doing it so he will try his best to show this side of Takashi through his acting. When asked if there is any similarity between himself and his character, Takenouchi revealed smilingly that he had also encountered emotional setbacks in the past which he didn't think was surprising given that he is already 46 and there are bound to be such episodes in life. As for doing recitation for the first time, he said that it was an useful experience to pick up tips which can help in acting. Takenouchi also revealed that he always had an inferiority complex about how he speaks and his voice but when he first met Asou, he was given a boost of confidence when she praised him for having a nice voice.

Meanwhile, Asou who had experience reciting Tanikawa Shuntaro's work "Yoru wa yasashii Tender is the Night" for a planetarium, said that she was glad to complete the scene in front of Tanikawa himself in one take and was reminded of how important it is to convey one's feelings to the listeners during the recitation.

When asked if there was any memorable scene to date, Takenouchi cited the part where they had a group recitation to read Miyazawa Kenji's "Ame nimo makezu" which will be featured in the third episode and exclaimed that his co-star Katagiri Hairi did such a wonderful job in conveying Miyazawa's thoughts in this work. Asou echoed his view and said that the power of a group reading was overwhelming and that she had goosebumps after hearing everyone read together.