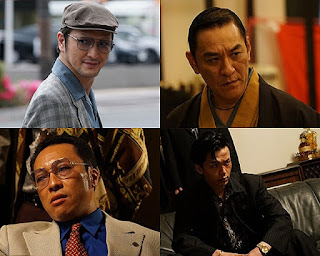 The supporting cast line-up of new movie "Korou no Chi" had been announced. The movie is based on the same-titled novel by Yuzuki Yuko that had won the 69th Nihon Suiri Sakka Kyoukai Sho.

The story is set during the Showa era before the anti-gang laws were enacted. Yakusho Koji plays a police detective Ogami Shogo who is rumoured to be on good terms with gangsters while Matsuzaka Toori plays a newbie detective Hioka Shuichi who is assigned to work with him on a case about the disappearance of an employee in a finance company rumoured to be a gang affiliate. While having reservations about Ogami's way of investigation which is bordering on being illegal, Hioka learns many things from Ogami. As the investigation develops, it results in a battle between gang members which causes Ogami to take drastic measures to resolve the situation. Maki Youko will play Takagi, the mamasan of a club named Riko while Ishibashi Renji plays Isogo Shohei, the leader of Isogo-kai and Eguchi Yosuke plays Ichinose, the young leader of Otani-gumi. Other co-stars include Takito Kenichi, Suruga Taro and Yajima Kenichi and Taguchi Tomorowo.

Nakamura Shido will be playing Takasaka Takafumi who is a reporter of Aki Shimbun and has a bad reputation for sniffing out the most dangerous and evil stories. Pierre Taki will play Takii Ginji who is an old friend Ogami and is the representative of the All-Japan Save the country association. Otoo Takuma will play Yoshida Shigeru who is a member of the gang Kakomura-gumi which is a rival of Otani-gumi while Nakamura Tomoya plays Nagakawa Kyoji who is a member of Otani-gumi.

The movie will be shown in cinemas from 12 May next year.