NTV clarifies the decision to show the ending of "Aishitetatte, Himitsu wa aru" on Hulu 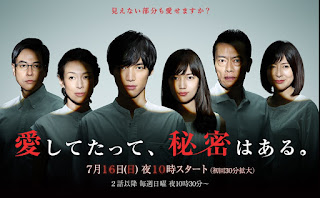 NTV clarified its decision to show the "real" ending of its Summer 2017 drama "Aishitetatte, Himitsu wa aru" on Hulu from 17th and 24th September amid strong criticism about the move by viewers especially those who do not have access to Hulu. The PR department explained that the two episodes to be shown on Hulu are actually a continuation of what happens to the lead character Okumori Rei played by Fukushi Souta and not the "real ending" to the drama series which ended its run on 17 September as reported in some media sources. It stated that it was aware of the misunderstanding caused by the choice of words used and will take the comments from everyone into consideration for future purposes.

Source: Sponichi Annex
Posted by Chiaki at 12:19 AM