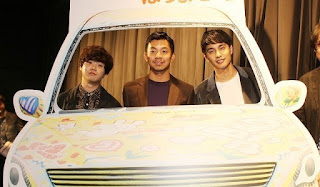 The completion event of new movie "Poncho ni yoake no kaze haramasete" was held at Shinjuku Musashinokan on 12 September which was attended by the director Hirohara Satoru and cast members Taiga, Nakamura Aoi and Yamoto Yuma. The movie will be shown in cinemas from 28 October.

The story describes how three senior high school boys Matahachi (Taiga), Jin (Nakamura) and Jumbo (Yamoto) lead meaningless lives and wants to do something to change their situations. They hatch a plan with their friend Nakata (Sometani Shota) to hijack the upcoming graduation ceremony with an impromptu live performance and decide to head out for the last trip of their senior high school days. Things do not progress as they expect but this makes them grow up and they seem to be guided to find their respective paths in life. As Nakata waits for the trio to return before the graduation ceremony, the boys are in for a surprise as to what lies at the end of their journey. Satsukawa Aimi will be playing a gravure idol Ai while Abe Junko plays a sex worker Maria.

Taiga commented that his own experience as a senior high school student was vastly different from Matahachi so he had fun going through a different experience through this movie. Back then, he was already working as an actor so he had to stop himself from going overboard in many aspects. As such, he expressed envy at how Matahachi and his friends could make full use of their youth in such a sparkling and shinning manner. As for how the movie turned out, Taiga said that he was relieved as he was instructed by the director not to worry about the sequence of events since Matahachi is one who doesn't look back and does things on intuition.

As for Nakamura, he said that he spent part of his senior high school days in Fukuoka before he moved to Tokyo in the second year. As he didn't have many friends then, he couldn't really say much about that period in his life so he was glad to be able to relieve that period through this movie. Last but not least, Yamoto revealed that after reading the script, he made an effort to act cute for this role although he was shy about doing so among his peers.

When asked about their senior high school lives, Yamoto was proud to declare that he was a regular player in his school's well-known tennis club and very popular with the girls then. He joked that he was the exact opposite of Nakamura who expressed jealousy at seeing someone like Yamoto. As for Taiga, he revealed that he used to key his best friend's number in his handphone with the name Aoi Yu since he is a big fan and got really excited whenever he saw a missed call entry with her name. He even keys his parents names as George Clooney and Scarlett Johansson till today. However, he didn't have time to join any club activities during senior high school and talked about making a movie with his classmate i.e. Sometani back then. They wrote their scripts together and shot their movies on their own but only Sometani managed to come up with an end product but he didn't succeed in the end. As such, he found it very gratifying to be able to work with Sometani in this movie which reminded them of what they did back in senior high school.