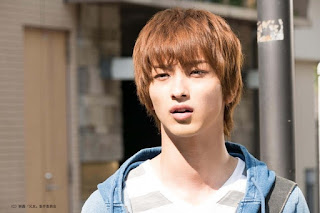 Yokohama Ryuusei will be taking on his first solo leading role in a movie when he stars in the new real-life adaptation movie "Anitomo" (My brother's friend) which is based on the same-titled manga by Akagawara Modomu. The movie will be shown in cinemas in spring next year.

The movie features Yokohama as the lead character Nishino Souta who is very good-looking but not very comfortable when dealing with the opposite sex. When he meets his buddy Nanase Yukihiro's younger sister Mai, the two of them fall in love with each other and begin a relationship.

With regard to his first leading role in a movie, Yokohama said that he is naturally very stressed about this but hopes to be able to enjoy the experience of playing Nishino. When asked to comment about his character, he described Nishino as a character who is not typical of the Prince Charming in most shoujo manga as he's very shy in front of girls. As such, the viewers will probably find his interaction with Mai quite mushy and embarrassing yet fun to watch as they gradually get closer. He hoped that the audience will like and support Nishino as he steps out of his comfort zone for the sake of the girl he likes.