FujiTV announces its decision to postpone the first O.A. of "Minshuu no Teki" due to upcoming election 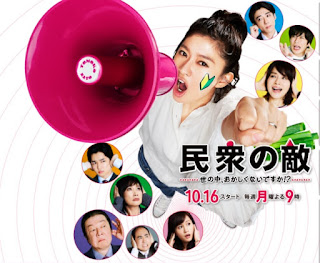 FujiTV announced on 30 September that they will be pushing back the broadcast of upcoming Autumn 2017 drama "Minshuu no Teki ~ Yo no naka, okashikunai desuka!? ~" which was originally slated to begin its run from 16 October. In the announcement, the TV station said that in view of the upcoming House of Representatives election due to take place on 22 October and that there are scenes of an election in the first episode of the drama, the decision was made to do so due to the sensitivity of the content and that the first OA date coincides with the election's public notice date. As such, the first episode will be postponed to a week later i.e. 23 October. As for what programme to show in the now-vacated timeslot, FujiTV will make an announcement on a later date.

This drama features Shinohara Ryoko as the lead character Sato Tomoko who lives with her husband and only child who is attending nursery. When Tomoko was in senior high school, her parents disappeared one after another which led to her quitting school. She then switched jobs many times before deciding to live a serious life unlike her parents. Tomoko got married to her husband who she met at her part-time job but he continues to keep switching jobs as a freeter. As such, she has to chip in to the household finances by taking on part-time jobs. Unfortunately, she got fired when she rebelled against rules in her company. Now in her 40s without a decent education and qualifications, Tomoko becomes attracted to the prospect of becoming a city councilor after watching a feature on a corruption scandal and how much a city councilor earns. After conducting research on her chances of being elected are as high as over 80 percent, Tomoko decides to give it a shot despite being a greenhorn in politics and has no backing from a political party. Right from the start, she is faced with difficulties such as making her PR poster and writing her street rally speeches but with the help of her husband and fellow mothers at the nursery, Tomoko gradually begins her journey to stand for election. Her rival in the election Toudou Makoto will be played by Takahashi Issei who comes from a family of politicians and highly regarded to become a potential Prime Minister while Ishida Yuriko will play Hirata Kazumi whose child also attends the same nursery as Tomoko's and her biggest supporter who graduated from a top-notch university and was a reporter covering political news at a news agency. Other co-stars include Furuta Arata, Maeda Atsuko, Chiba Yuudai, Tanaka Kei and Saito Tsukasa.