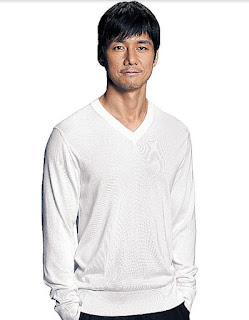 Nishijima Hidetoshi will be appearing in the upcoming NTV Autumn 2017 drama "Okusawa wa, toriatsukai chuui" starring Ayase Haruka which will begin its run from 4 October in the Wednesdays 10pm timeslot. The drama is an original story written by Kaneshiro Kazuki who specialises in cutting-edge suspense and action stories.

Ayase plays the lead character Isayama Nami who got married to a man on the spur of the moment after falling in love with him at first sight during a go-kon. Although she is a housewife who is living the good life in a quiet and upscale neighbourhood which is a huge contrast to when she was single, she is actually poor at cooking and cleaning the house and her biggest grouse is that she cannot stand her mundane life as a ordinary housewife. Nami also hates going around the bush and has a strong sense of justice which makes her extremely frightening when she is angered. She sets out to help the housewives living in the same neighbourhood who may look happy on the surface but have various issues hidden within. The reason why she is a thrill seeker will also be what she has been hiding from her husband and this will be gradually revealed as the story progresses. Hirosue Ryoko will be playing Oohara Yuri who is a very knowledgeable housewife and the unofficial leader of the trio including Nami and Sato Kyoko (Honda Tsubasa), a meek and curious housewife. Although the three of them are very different in terms of age and personality, Yuri and Kyoko become Nami's first friends in her life and they will be engaging in light girls' talk in the drama.

Nishijima will be playing Nami's husband Yuki who operates an IT company with his friend and is a gentle guy who is very accommodating towards Nami. Although they met at a go-kon, they got married after dating for just three months as he had fallen in love with her at first sight. He commented that it had been a while since he last worked with Ayase and this is the first time that they are playing a married couple. When he heard that Kaneshiro is writing a story about women, he was very interested to find out what kind of drama will be produced and hopes that viewers can look forward to and enjoy this drama.