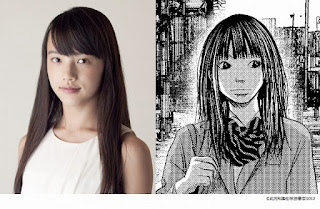 Kiyohara Kaya will be playing the heroine in the new TV Tokyo Autumn 2017 drama "Setoutsumi" starring Takasugi Mahiro and Hayama Shono which will begin its run from October in the Fridays 12.52am timeslot. The drama which is based on the ongoing same-titled manga by Konomoto Kazuya currently serialised in "Bessatsu Shounen Champion", was made into a movie in 2016 starring Ikematsu Sousuke and Suda Masaki who played Utsumi and Seto respectively while the heroine was played by Nakajo Ayami.

The drama features Takasugi as Utsumi Sou who is a cool, quiet and bespectacled high school student also attending cram school while Hayama plays Seto Shoukichi who used to belong to the soccer club and is very sociable and the moodmaker in school. The story is relatively simple and describes how these two high school boys chat in the Kansai dialect after school at the riverside since they both are free for a while due to Seto quitting from the soccer club and Utsumi having some time on hand before he has to go to cram school. Their conversations are peppered with a lot of wit and cynicism which are bound to make the viewers laugh. Kiyohara will be playing Kashimura Ichigo who is a schoolmate of Seto and Utsumi and regarded as the school's Madonna. Although Seto expresses interest in her, she is in love with Utsumi.

Kiyohara commented that as this is the first time that she is acting in a work which has strong comedic elements, she is worried about whether she can handle this. However, as the story is set in Osaka which also happens to be her hometown, she felt a sense of familiarity with the story and that she discovered how interesting the story was when she read the original manga. With regard to her character, she described Kashimura as someone who's frank to herself, somewhat innocent and a bit shrewd but hopes to uncover new charms in her character as the filming progresses.