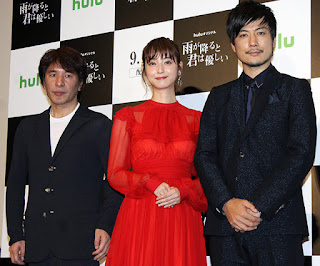 The screening event and press conference of new hulu drama "Ame ga furu to kimi wa yasashii" was held on 12 September which was attended by the scriptwriter Nojima Shinji and cast members Tamayama Tetsuji and Sasaki Nozomi. The drama which consists of 8 episodes, will be streamed on hulu from 16 September where 2 episodes will be uploaded weekly.

Tamayama plays Tachiki Nobuo, the assistant editor of a monthly literature magazine while Sasaki plays his wife Aya who used to be a model for a magazine and works at an old folks' home after getting married. Although the couple seem to be having a happy life, Aya is actually suffering from sexual dependency. She would wear red clothes which she usually doesn't wear whenever the weather is sunny and these are the days when she has the uncontrollable urge to sleep with other men. While trying to put on a pretense in front of Nobuo, Aya tries to seek treatment and goes for counselling. However, things start to get out control when Aya has sex with a man she comes to know from a dating site and he turns out to be Nobuo's colleague.

Sasaki commented that she was troubled over having to play such a character but felt that she could improve as an actress if she managed to overcome this challenge. In the end, she was glad that she had taken this up and that this was a drama she could be proud of. When asked how her values towards marriage had changed as a result of playing this character, Sasaki said that it hadn't been that long since she got married so it was difficult to say if anything had changed. However, she felt that if a couple could believe wholeheartedly in each other and accept each other's faults, she thought that this would mean that they have a strong bond and expressed envy towards such a relationship. With regard to Tamayama who plays her husband, she praised him for being a gentleman who was considerate and even helped her up after they filmed a bed scene. Upon hearing this, Nojima said that he didn't know about this which led Tamayama to comment that it was natural for him to do that. He also revealed that Sasaki seemed so at ease while filming that she felt asleep during the filming break while wearing a bathrobe. Tamayama then said that Sasaki was so courageous to take on such a controversial role and Nojima also praised her for being able to switch between pitiful at one moment and being wildly beautiful in the next moment.

Tamayama said that even though the trend these days seem to be all about extramarital affair stories, he believed that viewers will be able to go through a simulated experience of tragic pure love by watching this drama.