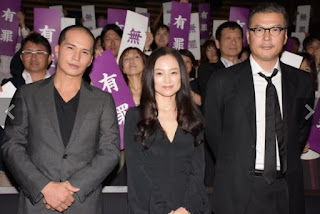 The completion screening event of new WOWOW drama "Chinmoku Houtei" was held on 21 September which was attended by cast members Nagasaku Hiromi, Ichihara Hayato and Tanaka Tetsushi. The drama which is based on the same-titled novel by Naoki Award winner Sasaki Jou, will begin its run from 24 September in the Sundays 10pm timeslot and consists of 5 episodes.

The story starts off with the discovery of the body of an elderly person living alone in Akabane, Kita Ward of Tokyo who was strangled to death. While conducting investigations into the murder, the police detectives at Akabane Police Station and those from the Metropolitan Police Department get a tip-off from nearby residents that a woman had been visiting the victim's apartment often. It was later found that the woman named Yamamoto Miki (Nagasaku) is the sole owner of a household chores helper business. When the police officers head to Miki's office, they are surprised to see the Saitama Prefectural Police already there to investigate a series of unnatural deaths supposedly linked to her. Through the trial, it is slowly revealed who Miki is and the truth behind these cases starts to unravel as media attention heats up to label her as a serial murderer even before the verdict is out. However, Miki clams up during the trial when it is her turn to testify instead of trying to clear her name. Ichihara plays Miki's boyfriend Takamizawa Hiroshi while Tanaka plays Miki's lawyer Yatabe Kan.

With regard to the scenes where Miki and Hiroshi went on dates, Nagasaku recounted that everyone seemed to be giggling as they watched the filming which made her feel even more shy and self-conscious. On the other hand, Ichihara said that their first scene together was the dating scene and he felt that Nagasaku was very cute when she said that she was shy about acting in such scenes. As his character is deeply in love with Miki, Ichihara said that he also felt happy about meeting Nagasaku on the set whenever they met. In response, Nagasaku said that there are a number of scenes showing the pure love between Miki and Hiroshi so she apologised to Ichihara's fans in advance if these scenes might make them feel uncomfortable. She then praised Ichihara for being very delicate and detailed despite his macho image. However, it seemed that he had vastly different sides in his character where he would get into trouble when he was drunk but he was also capable of doing very "quiet" things such as taking a lot of nice photographs during their filming breaks.

As for her character who chooses to maintain her silence most of the time, Nagasaku commented that it had been a while since she felt scared by the small number of lines as the weight of every word spoken by Miki and her facial expressions were more significant than any of the characters she had ever played before. In addition, she commented that since Sasaki hardly writes anything in excess of what's needed, she wondered if she could be up to the challenge of playing Miki in the drama.

As for Tanaka, he revealed that he was brought to tears after reading the novel and that was before he got the offer. As his impression of Yatabe was that the character was a very cool lawyer, he wondered if he could do it. However, after looking at the script, he found that the lawyer had become slightly less cool than he assumed so he was relieved in the end. Tanaka then revealed that he had a scene the day after the event where he had to say a lot of lines and wondered if he spoke too soon about the difficulty of playing his character. Upon hearing this, Nagasaku and Ichihara laughed at his remarks.