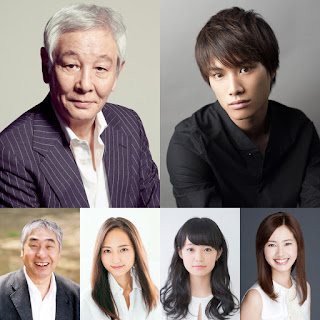 The supporting cast line-up of NTV Autumn 2017 drama "Ima kara anata wo kyouhaku shimasu" had been announced. The drama which is based on the same-titled novel by Fujiishi Namiya, will begin its run from 15 October in the Sundays 10.30pm timeslot.

The story features Dean Fujioka as the professional threatening specialist Senkawa Kanji who is great at investigating cases and solving them using his intimidating techniques to force criminals into a corner but he has a strange fashion sense. On the other hand, Takei Emi plays Kanesaka Mio who is a kind university student from a rich family and will do anything to help anyone who is in trouble. The two of them who are polar opposites i.e. a professional baddie vs. an extremely kind soul will come together to solve various cases which the police have engaged Senkawa to handle. Miyake Hiroki will be playing Senkawa's buddy Meguro who is a professional burglary expert and can pick any lock within seconds although he hardly looks like it with his usual warm and quiet appearance. As for Shimazaki Haruka, she will play Tochiotome who looks like any other young girl on the street but is actually a professional "searcher" who can get any information through a computer with her superior hacking skills and works with Senkawa.

Kondo Masaomi will be playing Mio's grandfather Todoroki Yuunosuke while Suzuki Nobuyuki will be playing Kyouda Kaoru who moves to the apartment beside Mio's. Ebisu Yoshikazu will play Robin, a staff member at BAR Seiryuu where Senkawa and his buddies frequent and Yamaga Kotoko will play Kan-chan who is a good friend of Mio and attends the same university as her. Sato Ryo will play Paruko who is also a good friend of Mio while Naitou Risa will play Rachel, another employee at BAR Seiryuu.