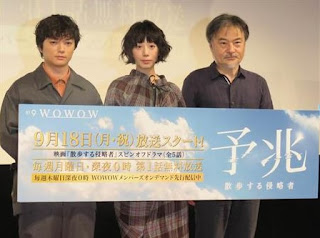 The completion screening event of new WOWOW drama "Yochou Sanposuru Shinryakusha" was held on 11 September which was attended by the director Kurosawa Kiyoshi and cast members Kaho and Sometani Shota.

The story describes how Yamagiwa Etsuko (Kaho) brings her colleague Asai Miyuki (Kishii Yukino) to the hospital where her husband Tatsuo (Sometani) works at after Miyuki tells her that there is a ghost in her house. However, when Etsuko pays a visit to Miyuki's place, she finds his father to be the only person with her. Miyuki is then diagnosed with a psychological deficiency in her mental concept of a family. Just then, Etsuko also meets a new surgeon Makabe Shiro (Higashide Masahiro) at the hospital and finds him strange for some reason. When explainable things start happening around Etsuko and Tatsuo is stressed psychologically for some reason, she starts to suspect Makabe for having a part to play in this especially after he tells her that he is here to invade Earth. Co-stars also include Nakamura Eriko, Yasui Junpei, Ishibashi Kei, Yoshioka Mutsuo, Otsuka Hirota, Chiba Tetsuya, Suwa Taro, Watanabe Makiko, Nakamura Makoto and Oosugi Ren.

Kurosawa revealed that the drama was recently completed and he didn't know how much to say about it since the screening event only featured the first episode out of five. As such, he would try his best to hide the key developments while keeping the audience engaged and interested to find out how the drama progresses.

Kaho who worked with Kurosawa for the first time through this drama, revealed how she was very nervous about their collaboration and had to brace herself to do better especially after her first day of filming didn't go so well. However, she felt that the tension she felt also helped her in doing a better job and enjoy the filming process eventually. As for Sometani who worked with Kurosawa before, he said that he was happy and satisfied about the interesting filming process.

As the filming period was a mere 3 weeks, Kaho revealed that she was expecting to have a punishing schedule. However, it turned out that she could knock off early enough i.e. sometimes by 6pm to have dinner at home every night so she was surprised by how smoothly things went. Sometani also echoed her view that it's rare to have a filming process where they get to eat dinner off the set while Kurosawa commented nonchalantly that this was perfectly normal to him because his filming is well-known for never going beyond 12 midnight.