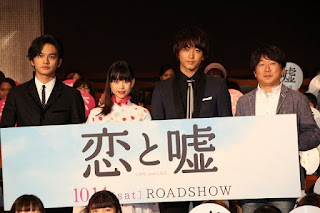 The completion screening event of new movie "Koi to Uso" was held at Iino Hall on 6 September which was attended by the director Furusawa Takeshi and cast members Morikawa Aoi, Kitamura Takumi from DISH// and Sato Kanta from Gekidan EXILE. The movie is based on the same-titled manga by Musao which is currently serialised in manga mobile app "Manga Box" and describes how the heroine Nisawa Aoi lives in a world where there is no freedom to love. In this era where the Japanese government collects and analyses the genetic information of its citizens, it decides the best marriage partner for everyone based on their genetic traits so as to reverse the tide on its shrinking population. However, the heroine is faced with the ultimate dilemma of choosing between two men i.e. her childhood friend Shiba Yuuto (Kitamura) who has been holding a torch for her and Takachiho Sosuke (Sato) who is chosen as her best marriage partner by the government.

The three actors who worked together for the first time in this movie, revealed how they had become closer during the filming. Kitamura described how Sato was like a primary school student and the moodmaker on the set while Morikawa said that Sato looked like a cool guy as he was reading books during the filming breaks but she found that he wasn't like that at all after she came to know him better. Sato also admitted that he talked a lot during the filming so he agreed with his co-stars' remarks. In addition, they also teased Sato for being someone who's very easy to get touched as there was a scene when Morikawa was supposed to cry but had to hold back her tears. However, the moment when the scene was finished, Sato exclaimed to the director that he was so touched by the scene and he actually cried for an hour after that.

The movie will be shown in cinemas from 14 October.