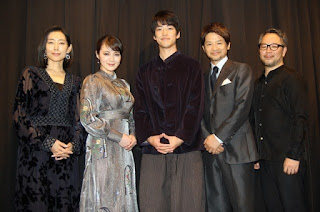 The first-day-screening event of new movie "Boukyou" was held at Shinjuku Musashinokan on 16 Sep which was attended by the director Kikuchi Takeo and cast members Kanjiya Shihori, Daito Shunsuke, Kimura Tae and Ogata Naoto.  The film is based on Minato Kanae's same-titled novel which won the 65th Nihon Suiri Sakka Kyoukaisho Short Story category and is set at Minato's hometown in Innoshima. Of the six stories in the book, two of them i.e. "Yume no Kuni" and "Hikari no Kouro" were selected to be adapted into this movie. The stories talk about the past and present involving two sets of parent-and-child relationships where Kanjiya plays the lead Miyako in "Yume no Kuni" and Daitou plays Wataru in "Hikari no Kouro".

Miyako is a woman who had always felt stifled living on the island where she was born and aimed to form a happy family once she became an adult. However, when "Dream Land", a symbol of freedom for her since she was a child, is about to be demolished, she starts to reveal something which she has always kept to herself all this while. On the other hand, Wataru returns home to the hometown on an island and finds a stranger Hatano claiming to be his late father's student coming to visit him. Through Hatano's revelation, Wataru's misunderstanding about his father is cleared as he finally realises what kind of a person his father was. Kimura plays Miyako's mother while Wataru's father is played by Ogata Naoto.

When asked about their impressions of Innoshima, Kanjiya said that it is a tranquil place with beautiful nature where they enjoyed their time there. Daito revealed that there were traces left from the island's heydays as a shipbuilding hub and he managed to chat a lot with the kids born there which was a valuable experience that can be used in his acting career. He also commented that he attended a strange meal gathering with a farmer's family and their friends where they spent time talking about the future of lemon farmers till 2am in the morning. Daito also jokingly revealed that he had an argument with the director once during the filming but it wasn't for work and was actually due to differing views they had about how to make the island vibrant and prosperous again. It took a local to stop the argument by simply saying that coming to the island is good enough to help them which led the audience to laugh at this exchange.

Towards the end of the event, the cast were asked to leave a message for their co-stars where Kimura expressed her liking for Kanjiya who is hardworking and tried very hard to do her best. Upon hearing this, Kanjiya who was brimming with tears in her eyes, expressed her gratitude to Kimura for helping her whenever she found it hard to immerse herself into her character.