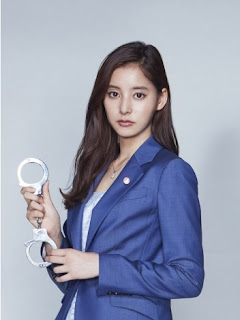 Araki Yuuko will be appearing in the new TV Asahi Autumn 2017 drama "Juuyou Sankounin Tantei" which begins its run from October 2017 in the Fridays 11.15pm timeslot. The drama is based on the same-titled manga by Kinuta Murako which is currently being serialised in "Gekkan Flowers" and features Tamamori Yuta, Koyama Keiichiro and Furukawa Yuuki in its cast.

Tamamori plays the lead character Maneki Kei who is a model. By a strange stroke of fate, he always becomes the first person to discover the body at a murder crime scene and is constantly seen as a suspect due to the uncanny coincidence. Koyama plays Suou Itsuki while Furukawa plays Simon Touma who are also models and join Kei in solving these murder cases in a comedic and straightforward way.

Araki plays the role of Saotome Karin who is a detective working in the 1st section of Metropolitan Police Department and the former girlfriend of Kei. The atmosphere between the two of them is somewhat ambiguous and awkward as they work together to solve murder cases where Kei is always the first person to discover the body.

As this character does not appear in the original manga, Araki said that she had to discuss with the director on how to portray this character and hopes to be able to get better and grow with Karin as the story progresses. As for working with Tamamori for the first time, Araki said that her first impression of him was that he is someone who she had seen on TV before and that he has a cool image. She is eagerly awaiting to see how her impression of him will change after they begin filming.