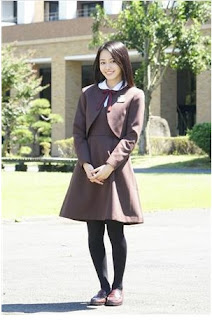 Yamamoto Maika will be appearing in the new movie "Miseinen dakedo kodomo janai" starring Nakajima Kento, Taira Yuna and Chinen Yuri. The film is based on the same-titled manga by Minami Kanan published in Sho-Comi Flower Comics as the first commemorative work marking their 50th anniversary and will be shown in cinemas from 23 December this year.

Taira plays the role of Oriyama Karin who is an innocent girl from a rich family and in the first year of senior high school. On her 16th birthday, the birthday present given by her parents is a marriage partner Tsurugi Nao (Nakajima), a third-year student in the same school who also happens to be her first love and the most popular guy in school. However, Nao's intention is for the Oriyama family's fortune thus Karin is stuck in a one-sided love marriage. Just then, Ebina Izuzu (Chinen), a first-year student who is a rich guy and in love with Karin, comes to know about her secret marriage to Nao and presses the latter to divorce Karin.

Yamamoto plays the role of Matsui Saya who is Tsurugi's ex-girlfriend and will become Karin's strongest rival in love. Yamamoto commented that her character has a strange possessive streak over her former boyfriend despite the fact that they had already broken up so she found that it was refreshing and interesting to play such a character. She called upon everyone to check out the battle between the wife (Karin) and ex-girlfriend (Saya) in the movie which is very enjoyable and interesting to watch.