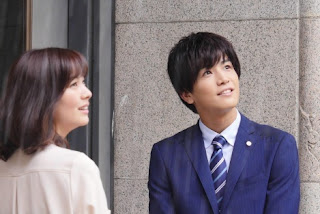 Iwata Takanori will be appearing in the upcoming FujiTV drama SP "Yo ni mo Kimyou na Monogatari Autumn 2017" which will be shown at 9pm on 14 October. This will be the first time that he is appearing in the series.

Iwata stars in the story titled "Unmei Tanchiki" (Destiny Detector) along with Ishibashi Anna who plays the heroine. Iwata's character Izumi Ryohei is a 29-year-old single man who believes strongly in everlasting love with the woman he's destined to meet. One day, he happens to pick up a device which looks like a watch which leads him to meet a  woman Kitazawa Yuki in the worst way when he gets splashed with a bucket of water by her. However, they meet each other by chance again and things develop like a romance drama to the extent that Ryohei starts to believe that Yuki is the person he is destined to fall in love with. Co-stars include Asaka Koudai, Hyunri and Maruyama Tomomi.

Iwata who revealed that he has been a fan of the long-running series, said that he is really happy to be able to take part in this drama but admits that he doesn't believe in destined love even though he had acted in many love stories to date. However, it will be nice to bump into someone who is his destined lover and he will definitely follow the instructions from the destiny detector if there is something like this in real life. He called upon the viewers to check out the drama to find out what happens in the end and hopes that they will enjoy watching this.