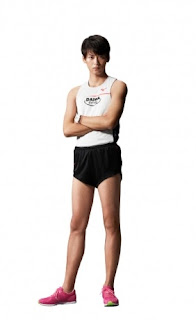 Takeuchi Ryoma will be appearing in the upcoming TBS Autumn 2017 drama "Rikou" starring Yakusho Koji which will begin its run from October in the Sundays 9pm timeslot. The drama which is based on the same-titled novel by Ikeido Jun, features Yakusho as the lead character Miyazawa Koichi who is the 4th generation president of Japanese socks manufacturer Kobaseya based in Gyoda City, Saitama Prefecture, which has been in business for more than 100 years. With the decline in demand for its products, the small company which has only 20 employees, strives to rejuvenate its business by entering the field of producing running shoes which feel as if you are barefooted. However, as the industry is very competitive and the company does not have sufficient funds, Kobaseya is faced with various challenges along its journey but Miyazawa strives on with the help of the people around him as they take on the bigwigs.

Takeuchi was selected during an audition held 6 months ago to play the role of long-distance runner Mogi Hiroto and has been going through running training since then despite his busy schedule. However, Mogi has been struggling to improve and even injures his knee just after joining a professional sports team as an athlete. It is later found that his running method caused the injury so while trying to correct his form, he comes across the Rikuou brand of running shoes from Kobaseya.

Takeuchi who used to be a soccer player, said that he felt as if it was fated for him to be playing Mogi in this drama. As he was one of the many sportsmen who had to retire due to injuries, he can identify with the feelings which Mogi has and thinks that he can tap on his experience to play this character. In order to train his body to look like a real running athlete, Takeuchi is going through a strict diet which also involves eliminating sugar from his drinks and abstaining from alcohol.

Other co-stars in this drama include Terao Akira who plays Iiyama Haruyuki who was the president of now-bankrupt Iiyama Sangyo which made silk lei that is an essential material in the Rikuou running shoes and Otoo Takuma who plays Kido Akihiro, the coach of Daiwa Foods' athletics team which Mogi belongs to. Shiga Kotaro plays Tomishima Genzou, the head clerk for Kobaseya while Mitsuishi Ken who plays Arimura Tooru who is a sports equipment shop owner and offers lots of useful advice to Miyazawa. Last but not least, Kimura Midoriko plays Motoko who is the wife of Iiyama and supports him during good and bad times.