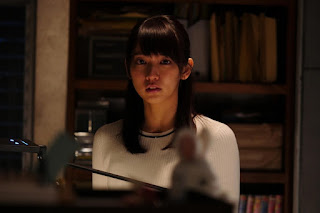 Yoshioka Riho will be appearing in the new FujiTV drama SP "Yo ni mo Kimyou na Monogatari Autumn 2017" which will be shown at 9pm on 14 October. This will be her first appearance in this series and she will be acting in the psycho-thriller "Terashima" from the third volume of manga "Tousou Tetsuba Bison" by Kasagi Hiroshi.

Yoshioka plays the character Terashima Hina who gets introduced to a manga artist Yamazaki (Mineta Kazunobu) by his editor Eda (Fukuda Atsuko) as his assistant has suddenly quit when his manga is about to be serialised. As he observes Terashima's beautiful side profile while she's working, Yamazaki starts to draw her face on his sketchbook. This leads Terashima to start talking about her childhood friend Kobayashi Mako (Oogo Suzuka)...

Yoshioka revealed that she is a big fan of the series and would always record the drama when it's shown. As such, to be able to act in this series, she was very happy about it. She also found out through working on this drama that the production crew actually gather weekly for meetings to come up with ideas for the SPs which are only shown twice a year. With regard to the story, she revealed that seemingly meaningless dialogue and expressions actually do lead to something which will be fully explained and shown to the viewers. As such, she hopes that viewers will pay close attention to every detail which will allow them to enjoy the climax in a better way.

Sources: Cinema Cafe / Nikkansports / Oricon
Posted by Chiaki at 12:32 AM