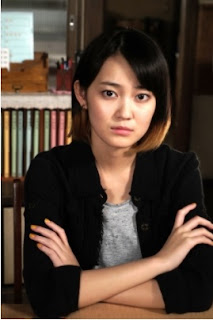 Yoshimoto Miyu and Motokariya Yuika will be appearing in the upcoming Tokai TV / FujiTV Autumn 2017 drama "Sakura no Oyakodon" which will begin its run from 7 October in the Saturdays 11.40pm timeslot. The original story features Maya Miki as the lead character Tsukumo Sakura who owns a secondhand bookstore. Legend has it that she will cook free oyakodon for anyone who is hungry and has nowhere to go to so that they can face up to their problems and try to move on. Actually, Sakura had a 17-year-old son who died 16 years ago due to being involved in an incident which then led to her suffering huge emotional trauma and the divorce with her husband. She raised her daughter Kyoko single-handedly and firmly believes that people who are hungry tend to think of the worst and go on the wrong path. That is why she decided to carve out a space at the back of her bookstore and offer oyakodon for anyone who comes without questioning their backgrounds or circumstances. With the appearance of a young girl Ninomiya Asami, this happens to bring back Sakura's bad memories of the past and forces her to face up to her own trauma.

Yoshimoto plays the role of Ninomiya Azami, a young delinquent who has left home and meets Sakura when she eats at the latter's bookstore. She commented that this is the first time she is playing such a character who doesn't believe in anyone and reacts sensitively at the mention of her mother. As such, she finds this to be a challenge and meaningful character to play.

On the other hand, Motokariya plays the role of Kyoko who supported her mother through the toughest days in their lives and is working as a freelance writer now. She hopes that the viewers will be able to feel and identify with the pain and trauma which the Tsukumos have been grappling with and the conflict in their parent-and-child relationship through this drama.