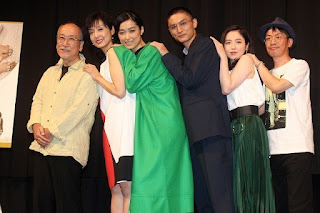 The completion screening event of new movie "Tsuki to Kaminari" was held at Space FS Shiodome on 13 September which was attended by the director Ando Hiroshi and cast members Hatsune Eriko, Koura Kengo, Kusakari Tamiyo, Fujii Takemi and Kiba Katsumi. The movie will be screened in cinemas from 7 October.

The film which is based on the same-titled novel by Kakuta Mitsuyo, features Hatsune as the lead character Yasuko who had lived with her late father's lover Naoko (Kusakari) and her son Satoshi (Koura) when she was a child. Years later when Yasuko and Satoshi have become adults, they reunite which changes her ordinary and peaceful life drastically.

Hatsune commented that through working on this film, she had come to realise how life can be so short as the seasons pass with each moment moving along as if they are overflowing from a container. As such, she felt that this film is something which will inspire people to embrace their pasts and futures tightly as they come to terms with life, rejuvenation, meeting people and parting with them.

This is the first time that Kusakari is acting in a movie directed by someone other than her husband Suo Masayuki. With regard to playing Naoko who starts drinking during the daytime, constantly smokes and has a bad temperament, Kusakari recounted that there were a number of interviews which mentioned how Naoko was a "dirty" character due to her unkept appearance but she actually didn't think of Naoko in this way and was shocked to know that this was how people saw Naoko. Nonetheless, she was worried about how people may see traces of her true self in her portrayal of Naoko so she tried to make sure that she went all the way in her acting and was glad to have taken on a character which deviated very much from her past roles.

As for Koura, he praised Kusakari for her great acting and that she looked so cool when she immersed herself fully into the role. As such, he learned a lot from her during the filming and even during the breaks where she took the initiative to talk to him and engaged in topics which could interest him. Hatsune also chipped in to say that she had always thought of Kusakari as an elegant and stylish actress before they met but when she saw how Kusakari fitted into the role of Naoko so seamlessly, she was very shocked and impressed with how Kusakari could manage to show such a variety of expressions.

As Koura appeared with his head shaved during the event, the audience were shocked by his new image. Although he did not talk about his new hairstyle on stage, insiders revealed that he cut his hair just to have a change and it was not for any upcoming role. Just 10 days earlier, Koura had appeared in another event but with his hair parted to one side.