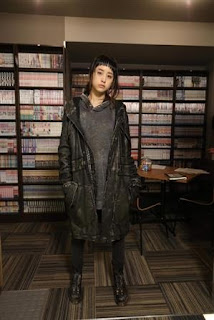 Yamamoto Mizuki will be appearing in the upcoming FujiTV Autumn 2017 drama "Keiji Yugami" starring Asano Tadanobu and Kamiki Ryuunosuke which begins its run from 12 October in the Thursdays 10pm timeslot. The drama is based on the same-titled manga by Iura Hideo and features Asano as Yugami Yukimasa who is a talented police detective but will stop at nothing to solve his cases even if the methods may be somewhat illegal. He has a keen eye for details which allows him to see through the suspects. Kamiki plays the newbie detective Hanyu Torao who has a strong sense of justice, has a no-nonsense character and graduated with top grades in school. The two of them who are extreme opposites, form an unlikely alliance to solve various cases where each episode will feature a different case.

Yamamoto who has been playing mainly feminine roles so far, will be playing the boyish hacker Hikawa Kazumi who is nicknamed Hizumi. She uses her wealth of knowledge about the cyber world and her research abilities to help Yugami in his investigations and is regarded as his hidden buddy. Having been embroiled in a past incident, Hizumi lost her voice and actually has an unknown link to Yugami.

Yamamoto said that this is the first time she is playing such a character so she is looking forward to the filming. Especially since she usually wears casual clothes and pants in private unlike her usual image where she wears skirts, she finds the costumes in this drama easier to move around in. However, she is very poor at dealing with mechanical and computer-related gadgets so she had to ask her younger sister to teach her some stuff in preparation for the filming. Last but not least, since Hizumi cannot speak, Yamamoto commented that she will have to rely on her body language and facial expressions to convey the character's feelings. This will be the first time she is working with Asano and her first collaboration in 5 years with Kamiki since they last worked in the 2012 movie "Kirishima, Bukatsu yamerutte yo".