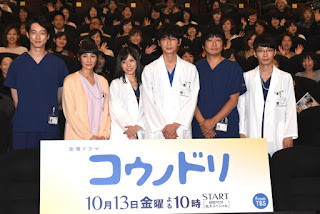 The production press conference and special screening event of TBS Autumn 2017 drama "Kounodori 2" was held at TOHO Cinemas Shinjuku on 7 October which was attended by cast members Ayano Go, Matsuoka Mayu, Yoshida Yo, Sakaguchi Kentaro, Hoshino Gen and Oomori Nao. The drama based on the manga by Suzunoki Yuu is set in the gynecology department of a hospital and features Ayano as the lead character Kounotori Sakura, a gynecologist who goes about his work in a cool manner but cares for his patients as well. He also has a hidden side to him as a talented pianist by the name of BABY.

Ayano revealed that the sequel this time will not only focus on the issues around the birth of babies but also the reality facing the families with the newborns and the personal parts of the main characters working in the gynecology department. As such, he hopes that the story will resonate with as many viewers as possible especially how tough the situation is with a lack of doctors and tough working conditions. He was also very glad to reunite with his co-stars who have been in contact with one another even after the first series ended in 2015. Hoshino revealed that as there are many babies on the set, it is natural for them to be smiling but his character is supposed to be a straight-faced guy so he has to stop himself from doing that while filming. As for Sakaguchi, although it had been 2 years since he last did a surgical scene, he was able to bridge the gap quickly with the help of everyone around him.

Matsuoka spoke about the guest star in the first episode i.e. Shida Mirai and said that she was very happy to be able to work with the latter who she saw as an actress she wanted to become in future. Yoshida then commented that when they were doing the first series, it was natural that they were somewhat excited while trying to feel their way around. However, with experience this time, they were able to begin filming smoothly without any hitches. Last but not least, Oomori said that although there are fictional elements in the story, the feelings of the characters are as true as they can get since the actors will have to immerse themselves fully into the story so as to convey this.

The cast also spoke about how they watched one another's works. At the mention of Hoshino's signature work "Nigeru wa haji daga yaku ni tatsu", Hoshino smiled and said that he won't be dancing nor smiling in this new drama though. Yoshida then followed up with a joke targeted at Ayano and asked if he had become a human being from Frankenstein with reference to his drama "Frankenstein no Koi" which led Ayano to "surrender" and asked someone to stop this topic from going on further.

The drama begins its run from 13 October in the Fridays 10pm timeslot.