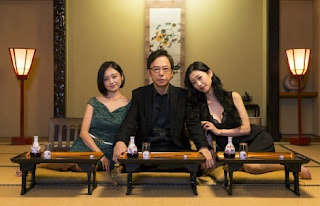 Dan Mitsu and Adachi Yumi will be appearing in the upcoming TV Tokyo Autumn 2017 drama "Fringeman ~ Aijin no tsukurikata oshiemasu ~" starring Itao Itsuji which will begin its run from 7 October in the Saturdays 12.20am timeslot. The drama is based on the same-titled manga "Fringeman" by Aoki U-hei and features Itao Itsuji as the lead character Ibuse Masumi who is nicknamed as the lover professor and teaches hopeless married men how to get a lover and have an affair. At a mahjong parlour located at the fringe of the city, three men Tasai, Mitsushima and Ango want to seek a breakthrough in their dry and boring marriage lives and desire to have a forbidden affair. They meet Ibuse who started having lovers at the age of 22 and boasts of the record of having as many as 11 lovers at one time where the latter starts to coach them on the techniques of having extramarital affairs and find lovers. He makes the trio stick to his four rules and gives them various tough missions to clear in order to achieve their goals.

Dan and Adachi will both play the lovers of Ibuse i.e. Miyabe Yuki and Yamura Misa respectively. Dan commented that in this era, there are many people who imagine themselves to be able to have extramarital affairs. While it may be fun to play such people and experience something which not everyone goes through in real life, she suggested that people should not try it easily. As such, she hoped that this drama will help people fulfill their wildest imaginations. On the other hand, Adachi revealed that she was struck by how interesting the script was when she read it and was excited about being able to play such a role. As such, she would try her best to play this character while ensuring that she does not go overboard with her acting and hopes that people will come to associate her with sexiness after watching this.