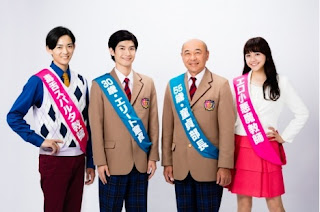 The supporting cast line-up of TV Asahi Autumn 2017 drama "Otona Koukou" starring Miura Haruma had been announced. The original story is partly inspired by statistics from the Ministry of Health, Labour and Welfare in 2015 where more than 25 percent of single men in their 30s and more than 30 percent of single women are said to have no sexual experience. Miura plays a 30-year-old elite salaryman Arakawa Hideto who works at a top bank after graduating from University of Tokyo. On the surface, he has everything in life but nobody knows that he is still a virgin and has zero dating experience even though he actually craves for love and sex. As the government wants to deal with the problem of low birth rates, a new law mandates that anyone who is above the age of 30 but has no sexual experience i.e. a group of people nicknamed "Yaramiso" which literally means reaching 30 without having done it, will be sent to an adults' senior high school. The sole condition to graduate from this school is that the person must have lost his or her virginity. Hideto is aghast to get sent to this high school against his will and does not even know how the government found out about his virgin status. In order to get out of this fix, Hideto has to learn about romance in this school and aim to graduate as soon as possible. However, his arrogance and pride gets in the way as he loves to look down on people, analyse people too much, show his boredom blatantly during a date which makes it look virtually impossible for him to graduate. While learning from his fellow classmates in their 30s to 50s who are equally clumsy in love like him, Hideto experiences a renewal of his teenage years and becomes a better person as time goes by.

Takahashi Katsumi will play Hideto's boss Gonda Kansuke who is a director in the same bank and relishes in being surrounded by young women. Despite being a virgin, he keeps saying things like he's sick of women so as to hide his inferiority complex. When he gets forced to attend Otona Koukou with his subordinate who becomes his classmate, Gonda will have to strive to graduate by losing his virginity. Takahashi who last played Miura's father in the NTV drama SP "Satsujin Hensachi 70" three years ago, praised the latter for being such a nice guy to listen to his boring talk during their breaks while Miura said that he sought a lot of advice from Takahashi as if he was his real father. As for playing a 55-year-old virgin, Takahashi said that this is the first time that he is attempting such a role and wondered if the lines in the drama will get them into trouble with the censors as they are quite provocative and sensational. Nonetheless, he will try his best to play this character and enjoy this unusual experience.

Ryuusei Ryo will play Yamada Pegasasu, the form teacher of Hideto's class and is well-known for his spartan teaching methods and venomous tongue who is not intimidated by having to teach students who are even older than him. Ryuusei commented that he has played many student roles to date so having to play a teacher this time is a new challenge for him. He also called upon the viewers to check out this unique late-night drama with an interesting theme.

As for Matsui Airi, she will play the sexy assistant form teacher Himetani Sakura who boasts of a wealth of sexual experience despite her young age. With respect to this role, Matsui said that she went to consult friends who are just like Sakura and hopes to use that as the basis of her acting in this drama. Having to say quite a lot of provocative and suggestive lines in this drama, Matsui would sometimes wonder if it's OK for her to say such things even though it is for the sake of acting.

Other co-stars include Yamada Maho who plays Hideto's classmate Madara Masumi, a hikkikomori confining herself to her apartment, Jutta Yuki who plays Kawamoto Carlos, a manager of a bento shop, Masana Bokuzo who plays Mochida Mamoru, the assistant form teacher who doesn't have good looks but is married to a very beautiful woman and has 5 lovers and Sugimoto Tetta who plays the school's principal Kakazu Kiichiro and delivers the invitations to enter his school personally to the students.