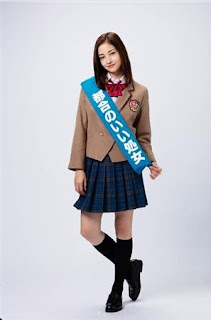 Kuroki Meisa will be the heroine in upcoming TV Asahi Autumn 2017 drama "Otona Koukou" starring Miura Haruma as her comeback drama after giving birth to her second child in June this year.  The original story is partly inspired by statistics from the Ministry of Health, Labour and Welfare in 2015 where more than 25 percent of single men in their 30s and more than 30 percent of single women are said to have no sexual experience. Miura plays a 30-year-old elite salaryman Arakawa Hideto who works at a top bank after graduating from University of Tokyo. On the surface, he has everything in life but nobody knows that he is still a virgin and has zero dating experience even though he actually craves for love and sex. As the government wants to deal with the problem of low birth rates, a new law mandates that anyone who is above the age of 30 but has no sexual experience i.e. a group of people nicknamed "Yaramiso" which literally means reaching 30 without having done it, will be sent to an adults' senior high school. The sole condition to graduate from this school is that the person must have lost his or her virginity. Hideto is aghast to get sent to this high school against his will and does not even know how the government found out about his virgin status. In order to get out of this fix, Hideto has to learn about romance in this school and aim to graduate as soon as possible. However, his arrogance and pride gets in the way as he loves to look down on people, analyse people too much, show his boredom blatantly during a date which makes it look virtually impossible for him to graduate. While learning from his fellow classmates in their 30s to 50s who are equally clumsy in love like him, Hideto experiences a renewal of his teenage years and becomes a better person as time goes by.

Kuroki plays the role of Sonobe Maki who is a 32-year-old career woman declaring that work is the love in her life. However, it turns out that she is clumsy in love and always unwittingly becomes "the second woman". At present, she is having an affair with her superior at work but due to her serious character, he wouldn't sleep with her thus resulting in her still being a virgin despite being someone's lover.


Kuroki described her character as a very unusual character especially the setting about her being someone's lover and yet still being a virgin which would be unthinkable in real life. Nonetheless, Maki is a very serious person who tries her best in everything she does although it backfires most of the time. As for wearing a school uniform in this drama for the first time in 12 years, she said that she didn't feel so uncomfortable about it since Takahashi Katsumi is also doing the same. However, she revealed that during the poster shooting session, she realised that people who walked past her seemed to be giggling so she realised that she must have looked odd in the uniform.

The drama begins its run from 14 October in the Saturdays 11.05pm timeslot.