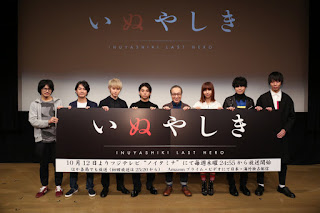 The preview screening event of new FujiTV Noitamina anime series "Inuyashiki" was held at the TV station's Multi Theatre on 5 October which was attended by the voice actors Kohinata Fumio, Murakami Nijirou, Hongo Kanata, the director Yabuta Shuhei, producer Matsuo Taku and the members of band Qaijff who is singing the ending theme "Ai wo oshitetekureta kimi e" for the anime. The anime will begin its run from 12 October in the Noitamina timeslot and there will be another real-life movie starring Tunnels' Kinashi Noritaka and Sato Takeru which will be shown next year.

The anime which is based on the same-titled manga by Oku Hiroya, features Kohinata as the lead character Inuyashiki Ichiro, an elderly salaryman who has no friends and a poor relationship with his family. One day, he gets struck by a mysterious explosion in a park which leads to him acquiring a cyborg-like body and superhuman powers which he resolves to use in helping others and find the meaning of his existence. On the other hand, a young man named Shishigami Hiro (Murakami) was also affected by the explosion and decides to use his powers to kill mercilessly in a bid to bring about the extinction of human beings. As the paths of Inuyashiki and Shishigami cross, they are destined to fight each other as nobody but Inuyashiki can stop the latter. Hongo's character Ando is a senior high school student and the childhood friend of Shishigami who vows to exterminate humans. Despite his cruelty, Ando is one of the few people who Shishigami still opens his heart to but he will join forces with Inuyashiki to stop his buddy.

Kohinata commented that he's very excited to find out how people will think of this anime after they watch this and revealed that he's especially eager to know Oku's views since he's the manga's author. He also expressed his wish that the original manga's fans will like his performance which will hopefully be similar to the image they have of Inuyashiki. However, he did reveal that he was wondering why he was approached to play Inuyashiki who seemed quite meekly and miserable and joked that it must have to do with his own weak image and his thinning hair. As for Murakami who is making his debut as a voice actor through this anime, he said that this should be considered his debut work in the world of anime which he hardly knows and he has enjoyed the recording process so far. At the moment, they have already finished 8 episodes' worth of recording and he pledged to continue working hard for the rest of the episodes.

As for Hongo who will appear both in the anime and real-life movie, he commented that both versions are very interesting so he's eager to see them as a viewer and fan of the original manga. He also revealed that the filming of the real-life movie was actually done in autumn last year before the recording for the anime. When he heard rumours about the anime version, Hongo had deliberately let out his wish in front of someone who looked like a person of a high rank that he wanted to be a part of the anime too. To his surprise, he got the offer to play Ando in the anime. Hongo also commented about how he wanted to have more scenes together with Kohinata and Murakami in this anime even though he had the company of other people most of the time while Murakami "complained" that he was mostly on his own and wished to join the others during the recording sessions.