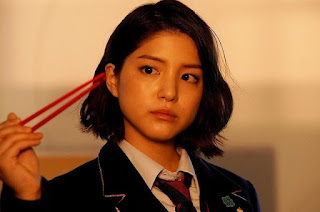 Kawashima Umika will be the heroine in the upcoming Netflix drama "Honoo no Tenkousei REBORN" starring the members of Johnny's WEST which will be streamed from 10 November. The drama series which consists of 8 episodes, is based on the same-titled manga by Shimamoto Kazuhiko that was serialised in Shuukan Shonen Sunday between 1983 and 1985 and also marks the first drama featuring a Johnny's Jimusho group which will be shown to an international audience. However, the story will be amended to feature the seven members as new transfer students to a mysterious elite school named Tanebi Gakuen set up by Takizawa Noboru (Kaga Takeshi - voice acting only) and they all happen to have the same first name Kakeru. They are then sent to various schools nationwide to pose as transfer students where they will work on secret missions to solve the problems facing the schools while vying with one another.

Kawashima plays the role of Hikari who attends Tanebi and is tasked with conveying the missions to the 7 Kakerus who infiltrate the problematic schools with them. Kawashima described her character as someone who tries hard to prevent the 7 Kakerus from fumbling in their missions and hopes that the viewers will enjoy watching the drama as much as they enjoyed filming it.