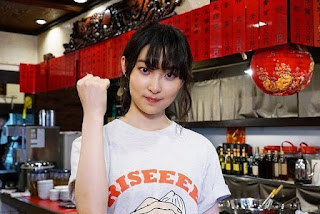 Ieiri Leo will be making her acting debut in upcoming TV Tokyo Autumn 2017 drama "Shinjuku Seven" starring KAT-TUN's Ueda Tatsuya which will begin its run from 13 October in the Fridays 12.12am timeslot. The drama which is based on the same-titled manga currently serialised in "Manga Goraku Special", is set at Kabukicho in Shinjuku where the lead character Nanase (Ueda) owns a pawnshop and is known for having a keen eye to determine whether an item is the real thing or a fake and its value. While appraising these items, he also gets involved in various incidents and trouble due to his clients.

Ieiri will play Shiori who works part-time at the gyoza restaurant in Shinjuku where Nanase frequently goes to. Ieiri revealed that although she has been a singer for 5 years since she made her debut at 17, she had always been interested in acting and attended the same acting class with Sugisaki Hana who belongs to the same agency as her. As she didn't think that she could concentrate fully on acting, she had rejected all offers to appear in dramas to date. However, having celebrated her 5th anniversary in February this year, she thought of wanting to express herself through another medium other than singing. In addition, having seen how her good friends Oohara Sakurako and Fujiwara Sakura juggle acting and singing, she was inspired to try the same thus leading to her accepting the offer for this drama. She admitted that it felt strange and she was also touched when she saw her name not as the singer for the theme song but as a member of the cast in the script.

In order to prepare for the filming which started at the end of August, Ieiri went to Kabukicho for the first time in her life alone 4 times i.e. in the early morning, afternoon, evening and late night to get a feel of the area. She recounted that there was once when she bumped into a group of men who looked very frightening in the early morning so she was so scared that she quickly called her agency's staff to come and pick her up.

Sources: Eiga.com / Yomiuri Hochi / Sanspo
Posted by Chiaki at 12:25 AM