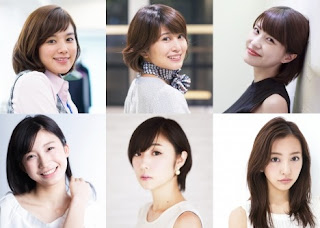 The female supporting cast line-up of TV Tokyo Autumn 2017 drama "Fringeman ~ Aijin no tsukurikata oshiemasu ~" had been announced.  The drama is based on the same-titled manga "Fringeman" by Aoki U-hei and features Itao Itsuji as the lead character Ibuse Masumi who is nicknamed as the lover professor and teaches hopeless married men how to get a lover and have an affair. At a mahjong parlour located at the fringe of the city, three men Tasai, Mitsushima and Ango want to seek a breakthrough in their dry and boring marriage lives and desire to have a forbidden affair. They meet Ibuse who started having lovers at the age of 22 and boasts of the record of having as many as 11 lovers at one time where the latter starts to coach them on the techniques of having extramarital affairs and find lovers. He makes the trio stick to his four rules and gives them various tough missions to clear in order to achieve their goals.

The five actresses who will play the "potential lovers" for Tasai, Mitsushima and Ango are Kakei Miwako, Satsukawa Aimi, Kishi Asuka, Ogura Yuka, Itano Tomomi. Kakei plays the role of Yamaguchi Emi who is Tasai's junior at the same company and his love interest. Having just entered the company two years ago, Emi is widely popular among the single male employees. As for Satsukawa, she will play Kawakami Emi who works at the information counter of a departmental store and is Mitsushima's love interest who he got to know through mutual friends at a drinking party. Kishi will play Eguchi Kaori who is a cabaret hostess and also Mitsushima's love interest. He goes to patronise her regularly thus leading to them becoming close enough to keep in contact outside of her workplace. Ogura will play Watanuki Risa, an university student who aspires to become a TV announcer and is Ango's love interest who he met at a video rental shop. However, she already has a handsome boyfriend. Itano will play Agawa Kurisu who is a rich man's daughter attending the same cooking class as Tasai, Mitsushima and Ango. Last but not least, MEGUMI will be playing Kirino Natsumi who is a mysterious woman and a frequent customer at the mahjong parlour where Ibuse and his "students" gather.