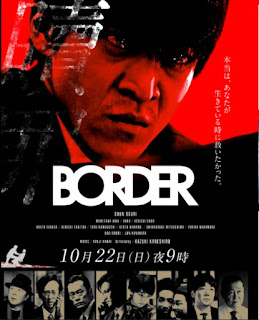 TV Asahi announced on 1 October that it will be pushing back the impending broadcast of new drama SP "BORDER 2 Shokuzai" starring Oguri Shun due to the upcoming House of Representatives election taking place on 22nd Oct. The drama SP which was scheduled to be shown on the same day of the election, will be postponed to a week later on 29 October while the broadcast time remains at 9pm. However, the broadcast dates for the spin-off drama SP "BORDER Shoudou ~ Kenshikan Higa Mika ~" starring Haru will not be affected.

The drama SP continues from the end of the drama series in 2014 where Ishikawa Ango (Oguri) gets too caught up in his pursuit of justice that he pushes a criminal Ando Chikao (Omori Nao) over from the rooftop of a building. Although Ando is supposedly dead due to the fall, he appears suddenly behind Ishikawa and grabs his shoulder to welcome him to the other side of the world i.e. evil.

Omg...why is the ending similar to Sherlock...I havent watched Border but the last scene really reminds me of Sherlock ..I hope it doesn't seem the same