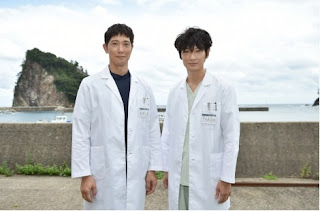 Ayano Go and Sasaki Kuranosuke began filming of the upcoming TBS Autumn 2017 drama "Kounodori 2" at Okinoshima-cho in Shimane Prefecture recently. The drama is scheduled to begin its run from 13 October in the Fridays 10pm timeslot and is set two years after the previous series ended in Autumn 2015. The cast from the original series i.e. Matsuoka Mayu, Yoshida Yo, Sakaguchi Kentaro, Hoshino Gen, Seino Nana, Asano Kazuyuki, Eguchi Noriko and Oomori Nao will also be joining him in the sequel

The drama based on the manga by Suzunoki Yuu is set in the gynecology department of a hospital and features Ayano as the lead character Kounotori Sakura, a gynecologist who goes about his work in a cool manner but cares for his patients as well. He also has a hidden side to him as a talented pianist by the name of BABY. Sasaki will be playing Kounotori's respected teacher Ogishima who used to be the mentor of Kounotori when he was an intern and works as a general practitioner and director of the local hospital at a far-flung island where gynecological medical care is not readily available. This will be the first time that Ayano and Sasaki are working together.

With regard to the filming at Okinoshima-cho, Ayano described the place as a place offering a variety of scenes and said that the staff had put in a lot of effort to enhance the content by including elements such as the use of a doctor helicopter. As for working with Sasaki, he said that he was grateful and happy to be able to act with Sasaki this time. On the other hand, Sasaki praised Ayano for being able to take on a variety of roles and said that it was a comfortable experience to be able to film on the peaceful island. Ayano also revealed that when they first arrived on the island and touched down at the airport, he was a bit shy about being welcomed by the locals who danced for them there.