Fujiki Naohito reportedly welcomes the birth of his third child 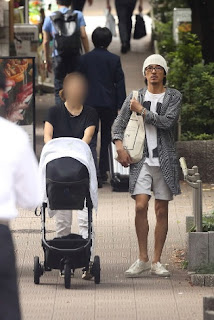 According to a recent article from Josei Jishin, Fujiki Naohito is said to have welcomed the birth of his third child last month and was spotted with his wife and the baby while on an outing this month. In the article, it was mentioned that Fujiki drove his wagon car to a car park at Shibuya on 19 July just after noon which happened to be a very hot day with temperatures exceeding 30 degrees Celsius. Fujiki was seen dressed in short pants, a white knitted cap and a summer coat while carrying his baby from the car and his wife who is 6 years younger than him brought out the pram. However, his son and daughter who are 9 years old and 6 years old respectively, were not seen with them. Fujiki was said to be having a rest day so he went out with his family in Shibuya. As that day happened to be Fujiki's birthday, the couple were seen buying a lot of food from the supermarket and he was rubbing cheeks with the baby with a smiling face.

Apparently, Fujiki's third child was born just last month and he only made the announcement to his fanclub members but did not release the news to the media. It is not known if the baby is a boy or girl.

Fujiki has been one of the MCs for NTV's variety programme "Oshare Ism" since 2005 and was recently seen in the TBS Spring 2016 drama "Watashi kekkon dekinain janakute, shinain desu" along with Nakatani Miki. He also took on the leading role in the stage play "Shaku ni wa shaku wo" in May which was the last work of the late Ninagawa Yukio.