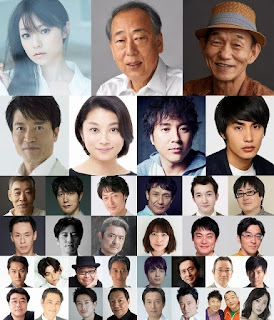 The supporting cast line-up of new movie "Soratobu Taiya" starring TOKIO's Nagase Tomoya had been announced. The movie which is based on the same-titled bestseller novel by Ikeido Jun, features Nagase as the lead character Akamatsu Tokurou who is the president of a transportation company. One day, an accident involving his company's truck happens where a tyre comes loose and causes a housewife's death. This results in a lack of trust and wave of criticism directed at his company for alleged maintenance faults. However, when Akamatsu investigates the truck's structure as he suspects a problem, he finds out that the truck's manufacturer Hope Jidosha is hiding a critical recall issue. In order to protect his company, employees, family and seek justice for himself, he takes on Hope Jidosha which tries to conceal the truth. Dean Fujioka will be playing Sawada Yuta who is the customer strategy section chief of Hope Jidosha and will face off with Akamatsu who wants to prove Hope's wrongdoing. Although he is reluctant to entertain Akamatsu's request for a re-investigation, Sawada himself has doubts about the original investigation and does his own checks where he is then caught between his sense of justice and his responsibility as an employee of Hope. Takahashi Issei plays the role  Izaki Kazuaki who is working at the sales department of Hope bank's HQ and in charge of the account held by Hope Jidosha which is under the same group. As he suspects something wrong with Hope Jidosha, he conducts his own investigation calmly and tries to uphold justice.

As there are 37 actors and actresses mentioned in this announcement, here is the list and the roles they play:

The filming of the movie ended in late April and the post-production will be completed by early 2018.