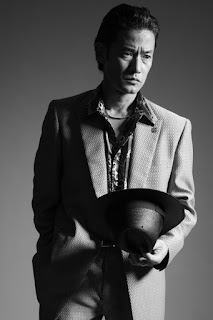 Takenouchi Yutaka will be playing a gangster for the first time in the new movie "Korou no Chi" starring Yakusho Koji which will be shown in cinemas from 12 May 2018. The movie is based on the same-titled novel by Yuzuki Yuko that had won the 69th Nihon Suiri Sakka Kyoukai Sho and is set during the Showa era before the anti-gang laws were enacted. Yakusho plays a police detective Ogami Shogo who is rumoured to be on good terms with gangsters while Matsuzaka Toori plays a newbie detective Hioka Shuichi who is assigned to work with him on a case about the disappearance of an employee in a finance company rumoured to be a gang affiliate. While having reservations about Ogami's way of investigation which is bordering on being illegal, Hioka learns many things from Ogami. As the investigation develops, it results in a battle between gang members which causes Ogami to take drastic measures to resolve the situation. Maki Youko will play Takagi, the mamasan of a club named Riko while Ishibashi Renji plays Isogo Shohei, the leader of Isogo-kai and Eguchi Yosuke plays Ichinose, the young leader of Otani-gumi. Other co-stars include Takito Kenichi, Suruga Taro and Yajima Kenichi, Taguchi Tomorowo, Nakamura Shido, Pierre Taki, Otoo Takuma and Nakamura Tomoya.

Takenouchi plays the role Nozaki Kousuke who is the young leader of Kakomura-gumi, the rival group of Otani-gumi. He is known for his flashy outfits, permed hair and speaking in the Kure dialect which makes him a presence hard to ignore. Takenouchi revealed that soon after he finished the movie "Kanojo ga sono na wo shiranai toritachi" which was also directed by Shiraishi Kazuya, he was approached to take part in this movie. Without reading the script, Takenouchi agreed to the offer. He was surprised by how good the story was after reading the script and became convinced that the movie will be a good one. Especially since he had been playing mostly good people or elites in his career, he is glad to be given a new challenge in this movie. As for speaking in dialects, Takenouchi revealed that he had roles which needed him to speak in dialects before but the Kure dialect is known for being extremely difficult due to its intonation which if not spoken properly, would sound like the Kansai dialect. As such, he had fun checking with the staff members who are natives of Kure on how he should speak the lines. With regard to his clothing in the movie, he admitted that it was beyond his imagination and extremely flashy. Initially, there was an idea of shaving his head for the role but to fit his character's flashy clothes, it was decided that permed hair would be more suitable.