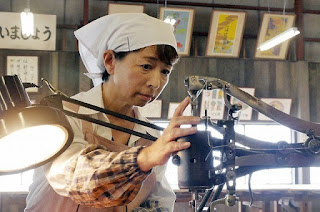 Agawa Sachiko will play Masaoka Akemi, the leader of the sewing team in Kobaseya where the average age of the members are 60 years old. Agawa commented that she was very surprised to be offered the role to act in a Ikeido Jun drama but she is gradually enjoying the filming process as she gets a clear picture of her character.

Pierre Taki and Koyabu Kazutoyo will play employees of Atlantis, the rival of Kobaseya and a major sports equipment maker. Taki's character Kohara Kenji is the sales department chief who values profits above everything while his subordinate Sayama Atsushi will be played by Koyabu. Taki commented that he thinks he and Koyabu will become "disliked" by everyone in Japan for what they will do in the drama while Koyabu expressed his hope to be able to contribute to the drama which he stressed is very interesting and worth watching.

Ichikawa Udanji plays Murano Takehiko who is a professional shoes fitter while Uchimura Haruka will play Yasuda Toshimitsu who is a section chief in Kobaseya and Amano Yoshihisa will play Ebata Kouhei who used to be a famous long-distance runner in senior high school and an employee of Mukuhato Tsuun. last but not least, Dan Fumi will play Miyazawa's wife Mieko who worries about and supports her husband and son Daichi (Yamazaki).