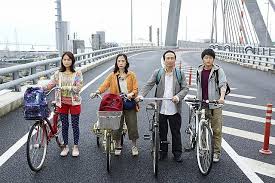 Kohinata Fumio and Fukatsu Eri will be playing a married couple in the new movie "Survival Family" which will be shown in cinemas next year. The movie which is directed by Yaguchi Shinobu, was shot over two and a half months from September last year. The idea of the movie was conceptualised after the director saw the massive blackout in the northern part of US in 2003. Co-stars include Tokito Saburo, Fujiwara Norika, Ohno Takuro, Shison Jun, Watanabe Eri, Takuma Shin, Emoto Akira, Daichi Yasuo, Izumisawa Yuki and Aoi Wakana.

The movie describes how the Suzuki family living in Tokyo copes with a world where everything powered by electricity suddenly doesn't work anymore. However, the reason for this is not known and there is no information disseminated so they do not know how long the situation is going to last. As a result, the head of the family Yoshiyuki (Kohinata) decides to lead his family out of Tokyo and head for the suburbs by riding bicycles.

As part of the filming, Kohinata and Fukatsu had to apply dirt on their faces and use oil on their hair to show the fact that their characters couldn't wash their hair. As such, director Yaguchi commented that this is probably one of the few Japanese films where the actors have to get that dirty on screen. In order to show the survival theme, the actors also had to go through tough scenes such as being brought down by a pig weighing more than 100kg and swimming in a freezing river. Kohinata who had to go naked on screen, commented that the director is one who doesn't compromise and joked that he is reliable yet detestable at times. Fukatsu also echoed by saying that the director always had tough demands on them.