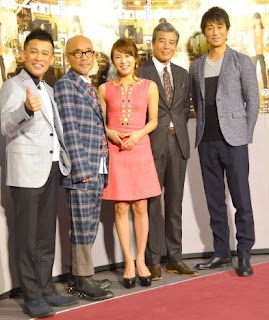 The screening event and press conference of new NHK drama "Machikouba no Onna" was held at its Tokyo HQ on 15 November which was attended by cast members Uchiyama Rina, Tachi Hiroshi, Takenaka Naoto, Yanagisawa Shingo and Nagai Masaru. The drama which consists of 7 episodes, begins its run from 24 November in the Fridays 10pm timeslot.


The story is based on the book "Machikouba no Musume" by Suwa Takako and set in a small town factory in Aichi Prefecture. Uchiyama plays the lead character Arimoto Hikari who is a 32-year-old housewife and lives with her husband (Nagai) and their son. When she was a child, her father Taizo (Tachi) tried to groom her to become his successor and manage the family business i.e. a small factory but Hikari resisted the idea. One day, when Taizo collapses due to exhaustion, Hikari is shocked to find out that her father has cancer and only has 4 days to live. In order to protect his factory, she decides to take on the role of company president. However, her husband who she is thinking of relying on to help her with the business, is sent to the US for an overseas posting. To make things worse, Hikari is seen as a president in name only and is belittled by the factory's executives, employees and their main bank. Co-stars also include Murakami Jun, Oshinari Shugo, Kariya Shunsuke and Ichige Yoshie.

When asked if there was any similarity between her and her character Hikari, Uchiyama said that her ability to keep smiling even if things get tough would be their biggest similarity. She also revealed that when she was young, she didn't really like her father but after he passed away, she came to know more things about him and gradually liked him a lot more just like Hikari. She realised much later that her father had kept a telephone card with her photo in his wallet all the time and regretted not knowing much earlier and expressing her thanks to him for his love. As such, when she was filming this drama, she kept imagining that her father was beside her so as to portray the feelings of Hikari. In response, Tachi who plays her father in the drama, praised Uchiyama for her acting and said that he could just follow her lead and go with the flow when they were acting together.

On the other hand, Takenaka who plays an employee in the factory, "complained" about how his character was supposed to be good at soccer but he has never played soccer in real life and got the lowest rating for physical education when he was a child. As such, he was worried about getting injured if he had to play soccer in this drama. As for Yanagisawa who also plays an employee in the factory, it felt like a good dream for him to be able to participate in this drama.

Meanwhile, this drama marks Nagai's first work after he became a father in May this year when his son was born. As such, this drama was especially memorable to him where the part about how his character got into a clash with his wife about parenting issues resonated most with him.