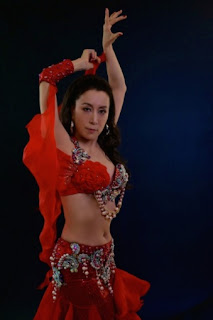 Takahata Atsuko will become a sexy belly dance teacher in the upcoming Tokai TV / FujiTV drama "Yaneura no Koibito" starring Ishida Hikari and Imai Tsubasa. The drama which begins its run from 3 June in the Saturdays 11.40pm timeslot, features Ishida as the lead character Saijo Kinuka who is a housewife and has a 17-year-old daughter and 15-year-old son with her husband. Due to the death of her father-in-law, she moves to a Western-style house in Kamakura left behind by him together with her family. Kinuka finally realises her longtime dream of opening a flower arrangement school by doing it in the salon of her new house. Just when she thinks that her life is already perfect, she is aghast to find her ex-boyfriend Seno Itsuki (Imai Tsubasa) at her housewarming party even though they had parted ways 18 years ago. Although Kinuka manages to chase Seno away that day, strange things start happening in the Saijo household as food is found to be missing from the fridge and her husband's clothing disappear for no reason. It turns out that Seno has started living in the attic of the house and this gradually causes the revelation of secrets hidden by the people around Kinuka including her husband Makoto (Katsumura Masanobu), children, mother-in-law Chizuko (Takahata) and best friend Kyoko (Miura Rieko) and leads to her being forced into a corner mentally. When a murder takes place, this then causes her fate to be affected drastically.

Takahata's character Chizuko is a belly dance teacher so as preparation for the role, she lost 5kg in three weeks before the filming. As Takahata used to be from the swimming team back in school, she isn't that concerned about baring her skin nor her belly and has a nice figure despite being 62. Initially, the costumes designed for Chizuko did not show her belly but Takahata felt that it seemed odd because of her character's occupation. When it came to the costume fitting, it was then decided that instead of trying to cover up her body in an awkward manner, it would be better to be natural about revealing her body. However, in order to ensure that she won't look like an eyesore to the viewers, Takahata went jogging with a rubber belt around her tummy in the evenings as part of her diet routine.

On the other hand, Takahata rated herself a low 27 points for her belly dance performance because she couldn't get used to the music and rhythm. Although she had learnt it in the past, she couldn't continue with it as it was too difficult for her. After just one day of training, it made her back hurt so much that she couldn't walk but it was a good way of losing fat in her belly area. When asked to described her character, Takahata said that Chizuko is a rather detestable person who speaks harsh things to others and dotes on her stepson excessively.