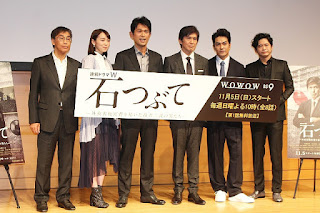 The completion screening event of new WOWOW drama "Ishitsubte ~ Gaimushou kimitsuhi wo abaita sousa nika no otokotachi" was held at GRAND HALL in Shinagawa on 26 October which was attended by cast members Sato Koichi, Eguchi Yosuke, Kitamura Kazuki, Hagiwara Masato, Iitoyo Marie and the director Wakamatsu Setsuro. The drama which consists of 8 episodes, will begin its run from 5 November in the Sundays 10pm timeslot.


The drama is based on a true case which was uncovered in 2001 about the defrauding of secret funds from the Ministry of Foreign Affairs. The investigation officers faced an uphill task of venturing into the sacred territory of the country and had to fight the forces within the organisation to uncover the truth in this case caused by the "three evil men" i.e. high-ranking officers in the ministry. Sato will be playing Kizaki Mutsuhito who is involved in the investigation while his superior Saimi Teruaki will be played by Eguchi.

Sato said that he was attracted to this drama by the fact that it was based on a non-fiction book about a real event and pledged to work hard towards the completion of the filming even though it was tough daily to "clash" with his co-stars. He also commented that he doesn't know how many years he has left to be an actor and wanted to do something which was meaningful and challenging thus he chose this project which made him feel very excited.

As for Eguchi who was working with Sato for the first time, he joked that he had spent so much time in such an intense manner with Sato that it felt like they had shot an 8-hour movie and he didn't feel like seeing the latter's face anymore. He then commented that it was a hard-to-come-by chance to be able to follow Sato's lead and act with him.

Iitoyo who is playing a police detective for the first time, revealed that she knew very little of the jargon used in the story so Sato gave her a lot of coaching. When asked who she would choose as her ideal boss, Iitoyo said that Eguchi's character would be the best since he is the type to give his subordinates support from behind. This apparently pleased Eguchi who promised to treat her to something later after the event.

When asked if there was any secret which the cast was keeping to protect themselves, Sato began by saying that he had been an actor for 37 years but there were works which he regretted acting in. However, he said that there was no way he would reveal this which led the audience to laugh.