Takki & Tsubasa to be on indefinite break from their music activities as a duo; denies talk of a disband 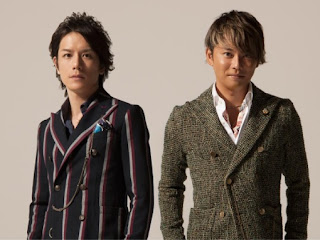 Takki & Tsubasa i.e. the duo formed by Takizawa Hideaki and Imai Tsubasa announced through a fax statement via their agency on 3 September that they will be on a temporary break from their music activities as a duo for an indefinite period of time but denied that they will be going their separate ways. This will take effect from 18 September after the duo completes their last performance together on TV Asahi's "MUSIC STATION Ultra FES 2017" which is scheduled to be broadcast live on 17 September. The duo are due to celebrate their 15th anniversary since their debut on 11 September.

In the statement, the agency apologised for the sudden announcement before the duo's 15th anniversary and said that what led to this this decision was partly due to the fact that they had been unable to perform together for the past few years. As such, the two of them started to discuss what to do in future about a year ago and finally arrived at the conclusion of focusing on their solo activities and taking a break from their activities as a group for the time being. Hopefully, this will help them to acquire and build up more skills in the meantime until they reunite as Takki & Tsubasa. They apologised to the fans and related parties for causing them worry over this and asked for their understanding that they need this period of time which would enable to improve as performers. As such, the duo asked for the continued support of everyone going forward.

At the end of the statement, Takizawa and Imai also provided handwritten comments about this issue. Takizawa wrote that he hopes to work hard in future as usual so that they will not regret this decision and asked for everyone's continued support. As for Imai, he expressed his wish to be able to return to his roots and focus on improving himself with this opportunity. He hoped that he will be able to do something in future which will make everyone proud of him and asked for their continued support.

Takizawa and Imai joined Johnny's Jimusho on the same day in 1995 and have been very close friends since their days as Johnny's Jrs. When the agency's president Kitagawa Johnny had the idea of letting Takizawa make a solo debut, the latter asked to make his debut with Imai thus leading to the birth of Takki & Tsubasa. In 2014, Imai took a break from work as he suffered from Meniere's disease.