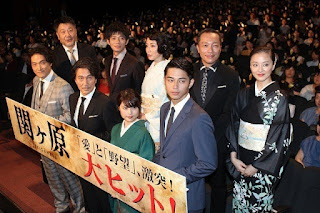 The first-day-screening event of new movie "Sekigahara" was held at TOHO Cinemas Nichigeki on 26 August which was attended by the director Harada Masato and cast members Okada Junichi, Arimura Kasumi, Hira Takehiro, Higashide Masahiro, Ito Ayumi, Otoo Takuma, Wada Masato, Nakagoshi Noriko and Takusho Koji. The actors were all dressed in suits while the actresses were in kimonos.

At the beginning of the event, Okada asked the audience how they thought of the movie which was met with loud applause. He went on to ask everyone to support this movie which he revealed that had taken the director 25 years to conceptualise and prepare for so it's definitely worth watching more than one time. Arimura also echoed his view and said that she was very happy to take part in this movie which also happened to be her first role in a period work. As for Yakusho, he joked that he is much slimmer now than when he played Tokugawa Ieyasu in the movie so he definitely looks much more presentable now. He also called upon the audience to promote the movie as a passionate story which they should watch in a cool cinema theatre.

When it was Higashide's turn to speak, he was met with loud gasps from the audience about how tall he is. Okada used this as a joke when he was asked by the host who he would like to become if he had to fight the Sekigahara battle. He chose Higashide because of the latter's height and said that he could have a bird's eye view of the situation as if he was standing on a tall platform. Otoo and Nakagoshi also had the same view which made Higashide embarrassed and said that he was not that different from the rest in terms of height.