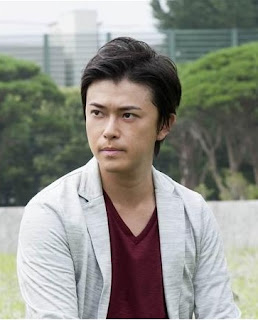 The supporting cast line-up of TV Tokyo drama SP "Kyoaku wa nemurasenai Tokusou Kenji no Hyouteki" starring Tamaki Hiroshi had been announced. The SP will be shown at 9pm on 4 October.

In this latest SP based on the novel titled "Hyouteki" by Mayama Jin, public prosecutor Tominaga Shinichi (Tamaki) will be investigating a big-name female politician Koshimura Miyabi who is the Minister of Health, Labour and Welfare on allegations of receiving bribes. Koshimura is highly regarded to be on the path to become Japan's first female prime minister and known as a driving force to push forward reforms in social welfare. Tominaga then sets out to investigate the case while faced with various obstacles in the complicated world of national politics. Natori Yuko will be playing the role of Koshimura while Tominaga's superior Hase Kiichi i.e. the assistant director of the prosecutors department will be played by Okuda Eiji. Tominaga's admin officer Igarashi Tetsuo will be played by Hagiwara Masato while the director of the prosecutors department Iwashita Nozomi will be played by Hada Michiko. Other co-stars include Takizawa Saori who plays Tominaga's colleague Fujiyama Ayumi and Tamura Ryo who plays Tominaga's father Kazuo who is a wagashi master in Kyoto.

Katsuji Ryo will be playing a news reporter Kanbayashi Yuta who is bent on investigating Koshimura's bribery scandal and exchanges information with Tominaga in their journey to overcome the strong evil forces. This will be the first time in 9 years since Katsuji and Tamaki are working together after 2008's NHK Taiga drama "Atsuhime". Katsuji admitted that he was feeling nervous when he met Tamaki again and joked that this was because the latter had become more good-looking now. As for playing a reporter for the first time, he commented that he wondered how he could look convincing as a reporter but it sort of came naturally when he started filming his first scene of doing a sudden interview of Koshimura.

Other co-stars include Iwaki Koichi who plays Koshimura Shunsaku, the husband of Miyabi and the president of her family's brewery business "Yuki no tsuru shuzou", Nakamura Shunsuke who plays Gakuden Kyohei, the president of medical consulting company JWF which had given bribes to Miyabi and Tanaka Tetsushi who plays Tojo Kensuke, Kanbayashi's boss at the newspaper company. Kurokawa Tomoka will play Otsuka Yuki who is Kanbayashi's colleague and also a reporter while Honda Hirotaro will play a former-prosecutor-turned-lawyer Miyazaki Hozumi who exposes JWF's bribes to Miyabi to the prosecutors' office.