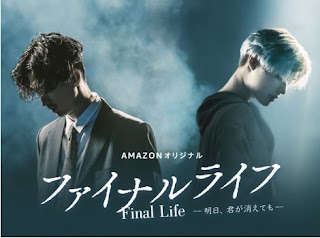 Matsuda Shota and SHINee's Taemin will be working together in the new Amazon Prime Video drama series "Final Life - Ashita, kimi ga kietemo -" (Final Life - Tomorrow, even if you may disappear -) which will be streamed to its members from 8 September. This marks the first collaboration between the two of them and Taemin's first appearance in a Japanese drama. There will be a total of 12 episodes which will be released every Friday (the first and second episodes are released on the same day).

The story describes how two men with totally different backgrounds come together to join the special secret unit in the police force to solve various difficult cases. Besides the action scenes, the sadness and love in their lives will also be depicted in the story. Matsuda plays Kawakubo Ryo who is the ace of the special secret unit and devotes his life to chasing after criminals while searching for his missing mother. Besides not having enjoyed his mother's love and suffering due to poverty, he also lost his beloved younger brother. Taemin will be playing Son Shion who graduated with top honours from medical school in the United States and is leading a happy life with his girlfriend when he gets involved in a terrifying brain experiment that leads to the loss of his memory. Co-stars include Takimoto Miori as the heroine Ayatsuji Kana who both men love, Totsugi Shigeyuki who plays Asada Takuto and Nonami Maho who plays Kano Risa, both who are members of the special unit and Aikawa Sho who plays Honda Kenichi, the leader of the special unit.