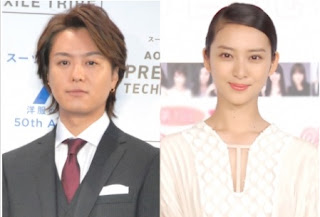 EXILE's vocalist TAKAHIRO and actress Takei Emi got married on 1 September after dating for two and a half years as announced by his agency through a fax statement sent to the media. It was also revealed that Takei is already 3 months' pregnant and expected to give birth in spring next year. There are no plans for a wedding nor press conference with regard to this.

In the joint statement from the newly-married couple, they apologised for the sudden announcement which is bound to cause inconvenience to related parties and revealed that they are also expecting a new family member next spring. The couple met through the NTV Winter 2014 drama "Senryokugai Sousakan" and were first reported to be romantically linked by magazine "FLASH" in April the following year. Although both parties denied being an item then, they had been actually dating for two and a half months then. The couple mentioned in their statement that they began their relationship as colleagues and progressed to becoming friends before becoming a couple with the intention of getting married as they were drawn to each other's personality.

With regard to their future plans, the couple pledged to treasure the feeling of gratefulness to everyone and respect each other as they grow and become better in their careers. They apologised again at the end of the statement for not being able to share the news with their fans earlier until today.

TAKAHIRO also released a message to his fans via his agency's official blog where he mentioned that although he is still far from mature, he will continue to seize every opportunity given to him and develop himself further as a performer without forgetting his core values and being grateful to the fans. He hoped that he will become an even better performer in return for the support of his fans and wished that they will continue to support him warmly.

On the other hand, Takei who is scheduled to star in NTV's Autumn 2017 drama "Ima kara anata wo kyouhaku shimasu" along with Dean Fujioka, will continue to participate in the drama's filming. According to NTV, they had been informed by Takei's agency about the news and will try their best to make accommodations for her condition during the filming.