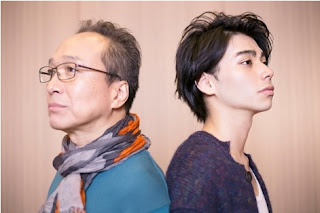 FujiTV will be showing the anime version of "Inuyashiki" in its Noitamina slot i.e. Thursdays 12.55am from 12 October which will feature Kohinata Fumio and Murakami Nijiro as the lead voice actors. The story is based on the same-titled manga by Oku Hiroya which had sold more than 2 million copies to date. A real-life adaptation movie starring Kinashi Noritake and Sato Takeru will be shown in cinemas next year.

Kohinata will be playing the lead character Inuyashiki Ichiro, an elderly salaryman who has no friends and a poor relationship with his family. One day, he gets struck by a mysterious explosion in a park which leads to him acquiring a cyborg-like body and superhuman powers which he resolves to use in helping others and find the meaning of his existence. On the other hand, a young man named Shishigami Hiro (Murakami) was also affected by the explosion and decides to use his powers to kill mercilessly in a bid to bring about the extinction of human beings. As the paths of Inuyashiki and Shishigami cross, they are destined to fight each other as nobody but Inuyashiki can stop the latter.

With regard to his involvement in this anime, Kohinata said that he is also a fan of the original manga and hopes that his performance will meet up to the expectations of the manga's fans. As for Murakami, he expressed his view that the story shows the silliness and beauty of human beings in the modern era and is very interesting so he hoped that everyone will support this anime.

The opening theme song of the anime will be "My Hero" which is sung by rock band MAN WITH A MISSION who is a big fan of the original manga.