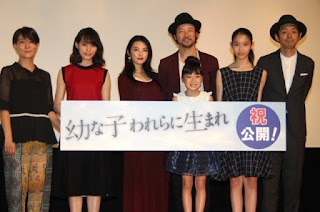 The first-day-screening event of new movie "Osanako warera ni umare" was held at Theatre Shinjuku on 26 August which was attended by the director Mishima Yukiko and cast members Asano Tadanobu, Tanaka Rena, Kudo Kankuro, Minami Sara, Kamata Raiju and Arai Miu. The movie which is based on the 1996 same-titled novel by Shigematsu Kiyoshi, features Asano as the 40-year-old once-divorced lead character Tanaka Shin who remarries Nae (Tanaka), also a divorcee. Together with her two children from a previous marriage, Shin tries to forge a bond with them but is met with especially strong resistance from Nae's elder daughter Kaoru who keeps wanting to meet her birth father i.e. Nae's ex-husband Sawada (Kudo) despite the fact that the latter was physically abusive towards Nae and didn't take care of his family. On the other hand, Shin has a daughter Saori from his previous marriage to Yuka (Terajima Shinobu) who later remarried an university professor and moved to the US. Despite being physically apart from Saori, Shin tries to show his love for Saori by meeting her regularly which makes Nae feel uncomfortable. When Nae finds out that she is pregnant with Shin's child, the couple have to grapple with the difficulties that come with forming a new family unit and their conflicting feelings towards each other's previous spouses and their children from the previous marriages.

As Kudo plays a husband who was violent to his ex-wife, he said with a wryly smile that this is a movie he can't show his daughter and he can't identify with his character at all. However, there are indeed such people in this world so he had to show this side of his character through his acting. Tanaka also chipped in to say that it had been a very stimulating and exciting experience during the filming but the scene when she got beaten up by Kudo would have to be on top of the list. It left an even deeper impression on her because that was filmed on her birthday last year and she had just received a cake from the staff moments before she was to be "strangled" by Kudo.

Asano revealed that the reason why he decided to participate in this movie was the script. As most of his characters to date tend to have such unique traits, he had always wanted to act as someone who doesn't cause anything in the story and just goes with the flow of developments. As such, he could finally tap on his experience and pour everything into this character.

Minami who is making her acting debut in this movie, said that she was very unsure about what to do but received advice from the director to react accordingly to her co-stars' acting so this helped her to overcome her fear. Tanaka also praised Minami who plays her daughter for being very direct in her acting and gave her a lot of inspiration as a result. Kamata and Arai also had good words for Asano who plays their father and said that they had a lot of fun during the filming thanks to him being like a true father to them.