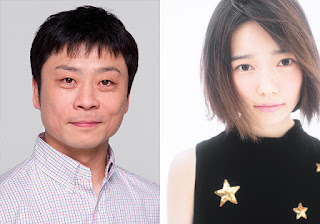 Miyake Hiroki and Shimazaki Haruka will be appearing in the new NTV Autumn 2017 drama "Ima kara anata wo kyouhaku shimasu" starring Dean Fujioka and Takei Emi which begins its run from October 2017 in the Sundays 10.30pm timeslot. The drama which is based on the same-titled novel by Fujiishi Namiya, will be Fujioka's first leading role in a private network drama series.

The story features Fujioka as the professional threatening specialist Senkawa Kanji who is great at investigating cases and solving them using his intimidating techniques to force criminals into a corner but he has a strange fashion sense. On the other hand, Takei plays Kanesaka Mio who is a kind university student from a rich family and will do anything to help anyone who is in trouble. The two of them who are polar opposites i.e. a professional baddie vs. an extremely kind soul will come together to solve various cases which the police have engaged Senkawa to handle.

Miyake will be playing Senkawa's buddy Meguro who is a professional burglary expert and can pick any lock within seconds although he hardly looks like it with his usual warm and quiet appearance. Miyake commented that it had been a while since he last worked with Fujioka in the NHK morning drama "Asa ga kita" but they didn't have many scenes together then. As such, he is looking forward to working more closely with Fujioka this time and will do his best to match up to the latter's powerful gaze.

As for Shimazaki, she will play Tochiotome who looks like any other young girl on the street but is actually a professional "searcher" who can get any information through a computer with her superior hacking skills and works with Senkawa. Shimazaki said that she is happy and grateful to be given a chance to act in another drama in the same timeslot as "Yutori desuga nani ka" when she was still in AKB48 and will try her best to create a striking image to suit this character's traits.