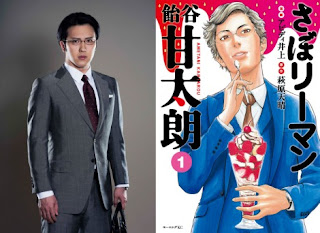 Onoe Matsuya will be taking on his first leading role in a drama series when he appears as the lead of TV Tokyo Summer 2017 drama "Saboriiman Kantarou" (The playing truant salaryman Kantarou) which begins its run from July in the Thursdays 1am timeslot. The drama is based on the popular manga "Saboriiman Ametani Kantarou" by Hagiwara Tenten and features Onoe as Ametani Kantarou, a single and bespectacled salaryman working in a publishing company's sales department who is known by the people around him to be a capable worker and looks very cool on the surface. However, he is actually a desserts lover and he tries to hide this and satisfy his craving by playing truant during work at times in search of nice desserts on his own. Besides showing the delicious desserts which Kantarou will savour, VFX technology will also be in use to show the images in his brain when he gets high on his beloved desserts.

Onoe admitted that as he is also a desserts lover and would go to look for nice desserts on his own at times, being able to take on this role is like a dream come true for him. He is especially excited about being able to visit some of the famous Japanese and Western-style desserts in Tokyo which will be featured in the drama. As for taking on the leading role in a drama series, he is happy and thankful to be given the chance and hopes to show the gap between his character's serious image and his unconventional love for desserts through his acting. Ideally, he wishes that this drama will in turn increase the number of guys who love desserts.

Besides being shown on TV, the drama will be streamed via Netflix one week before each episode's scheduled broadcast on TV Tokyo.